As a technological university, the ETH achieved a large degree of autonomy, thanks to which it was able to build up steady and stable cooperation with the state and the economy. The key to the new relationship of the School with the outside world was the successful combination of theoretically formulated and experimentally tested knowledge.

Applied research and fundamental research became increasingly important compared to teaching. This shift meant that an indispensable factor in the scientific success of the Institute was the acquisition of state-of-the-art equipment, which in turn called for new forms of financing. 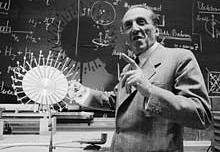 The physics professor Paul Scherrer (1890-1969) established a reputation for his ability to impart scientific facts.

At the same time, the ideal of a unity of all the sciences was increasingly contested. It was not just the natural sciences and the humanities but also individual disciplines in natural sciences and technology that seemed to grow further and further apart as they became increasingly specialized. As it became impossible to generalise standards with regards to methods and procedures, the response was to come up with the idea of linking together various forms of knowledge. According to one ETH Rector in the period between the wars, this chain led from mathematics via crystallography and materials science to the nations economic and cultural interests.

This chain called for great organizational skills and imagination. After the First World War, the ETH intensified the work with industry via mixed financed institutes. For example, the Laboratory of Hydraulics and Hydrology VAW (1930) or the Department for Industrial Research AFIF (1937) linked the ETH into a corporative security net made up of external connections with federal, cantonal and industrial bodies. 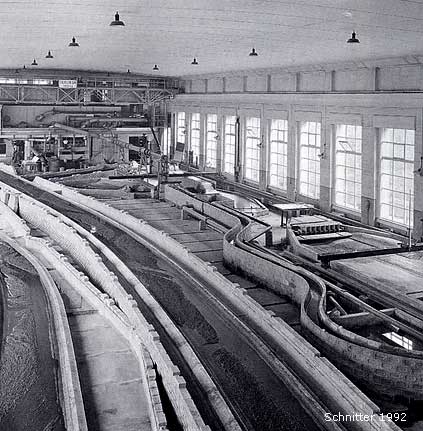 Working models in the Laboratory of Hydraulics and Hydrology around 1938.

At the National Exhibition in Zurich in 1939, the ETH was omnipresent, not just physically in terms of apparatus but also ideologically in terms of scientific ideas. Since 1936, it had been involved in the national education system as part of what was known as the intellectual national defence programme (Geistige Landesverteidigung). At the same time, the President of the ETH, Arthur Rohn, developed and pursued an innovative idea that indirectly led to the setting up of the Swiss National Science Foundation in 1952.

All in all, the ETH sailed along very serenely as the scientific flagship of the Federal State, backed by a specific mixture of patriotic pride, national defense interest and the desire for a harmonious form of democracy. Economic growth was transformed into academic growth - with the constant reminder of its great significance for the prosperity of all.

In all of this, the ETH performed the role of a national information centre, carefully registering what was going on in the world of science and in society at large. For example, in the 1950s it monitored local modernisation problems such as water pollution and at the same time successfully entered the sphere of international research projects. But in the early 1960s it gradually became clear that what had hitherto worked so successfully was no longer keeping pace with the passage of time.

The book on the history of the ETH